Farewell To A Friend

Muskerry GAA would like to extend our sincere condolences to Paudie Palmers family, on his untimely passing.  Down through the years Paudie was a staunch supporter of GAA in general, but was also closely involved with our division.  Paudie got involved with us when we  started our Awards nights back in 2014.  Paudie MC'd our Gala Award Nights in Oriel House Hotel to his usual high and impeccable standard.  Paudie was ever the professional before, during and after the event.  Another admirable trait was Paudies enthusiasm for all sport, and when there was anyone local, be it from Innishannon, Cork or Munster doing well he was first to congratulate and support that person. You could meet Paudie anywhere and he would stop and have the chat about club, County, family or even politics.

Paudie.... you will be missed. 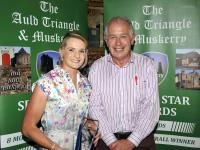 Paudie and Briege in June 2014