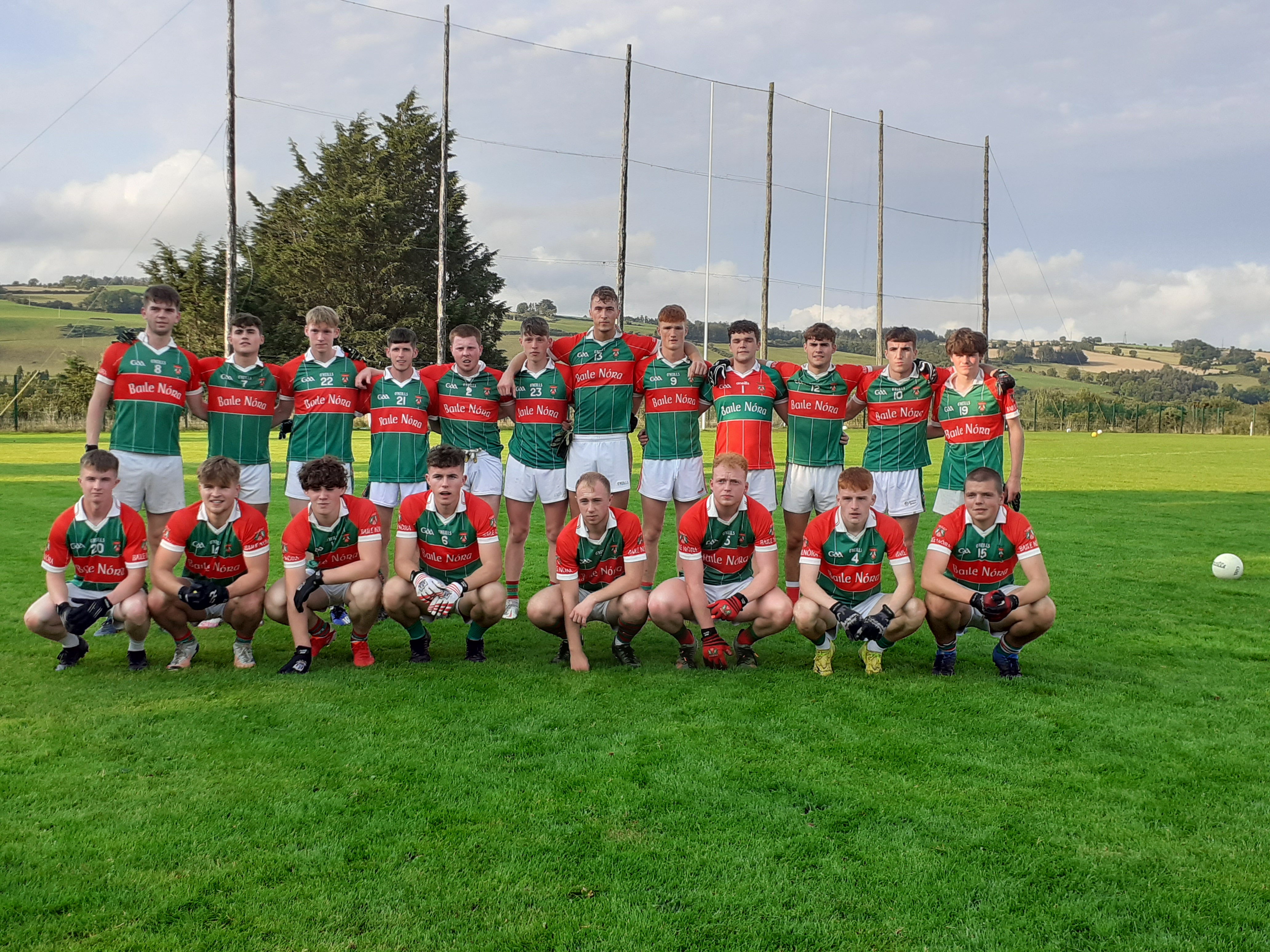 Ballinora finishing up the champions after a very sporting game.

Ballinora   1 – 10     Aghabullogue   0 – 10
Ballinora won the Macroom Motors Mid Cork U21 B Football championship at Ovens with an impressive display by their young team.  Faced by an Aghabullogue side which had been justifiably highly rated, Ballinora proved their worth by sustaining periods of intense pressure, snatched a vital goal at the three quarter stage and then proceeded to turn in a superb last quarter performance which a gallant Aghabullogue side could not match.
An early point from Conor Quirke was added to by a point from a 6th minute Shane Kingston free to get the winners off to a good start.  Aghabullogue got a point from a Luke Casey free in the 9th minute and Casey pointed another free to bring his side level on 13 before Reece O’Sullivan put Aghabullogue in the lead just before the water break, 0-3 to 0-2.
On the resumption, Ballinora had a point from hard grafting Tommy Burns and Shane Kingston put them in front again from a 21st minute free.  Aghabullogue enjoyed a fine period coming up to the interval.  Brian Dineen popped over an equaliser in the 22nd minute and Jack Oldham took a fine point to put his side in front.  Ballinora lost Peter Mayer to injury and when Luke Casey pointed a free it gave Aghabullogue a 0-6 to 0-4 lead at half time which was deserved.
Ballinora effectively won this game in the third quarter when they were under periods of sustained pressure, lost a defender for ten minutes to a black card but still came to the water break in the lead after Nathan Davis struck for an opportunist goal in 43rd minute which gave them a lead they were not to lose.  Shane Kingston had scored a point from play in the 33rd minute, Ballinora then lost a defender to a black card, Cialan O’Sullivan restored the two point advantage to Aghabullogue.  Shane Kingston, from a free, narrowed the gap to the minimum in the 40th minute and three minutes later Ballinora were buoyant as wing back Nathan Davis squeezed the ball in off the far post with a low drive across the goal.  Aghabullogue had a Jack Oldham point in reply to leave Ballinora leading by 1-6 to 0-8 at the last water break.
Ballinora were an unstoppable force in the final quarter.  Shane Kingston pointed a free in the 47th minute, took a pass from Davis to fire over another from play a minute later but back came Aghabullogue with a point from a Luke Casey free ten minutes from time.  Ivan Quirke fired over two Ballinora points in quick succession to open up a four point gap.  Luke Casey pointed another free to cut the deficit for Aghabullogue back to a goal but the Ballinora defence stood firm and composed.
Scorers: Ballinora: N Davis 1-0, S Kingston 0-6 (0-3f), I Quirke 0-2, C Quirke, T Burns 0-1 each.   Aghabullogue: L Casey 0-5 (0-4f), J Oldham 0-2, R O’Sullivan, B Dineen, C O’Sullivan 0-1 each.
Ballinora: Joe Conway: Ronan Barrow, George Forde, Liam Lyons: Michael Quirke, Neil Lordan, Nathan Davis: David O’Halloran, Colin O‘Flynn: Peter Mayer, Shane Kingston, Tommy Burns: Ivan Quirke, Conor Quirke, Brian McCarthy (capt.). Subs: Danny Dineen 28, Adam Laverty 42.
Aghabullogue: Daniel O’Sullivan: Killian BarryMurphy, Conor Smith, Seán Buckley: Jack Murphy, Adam Murphy, Conor Dineen: Mark O’Connell, Pádraic O’Sullivan: Brian Dineen, Cialan O’Sullivan, Ardghal Ó Buachalla: Luke Casey, Jack Oldham, Reece O’Sullivan. Subs: Tom Griffin 45, Jason O’Sullivan 52.
Referee: Ted Hayes, Éire Óg. 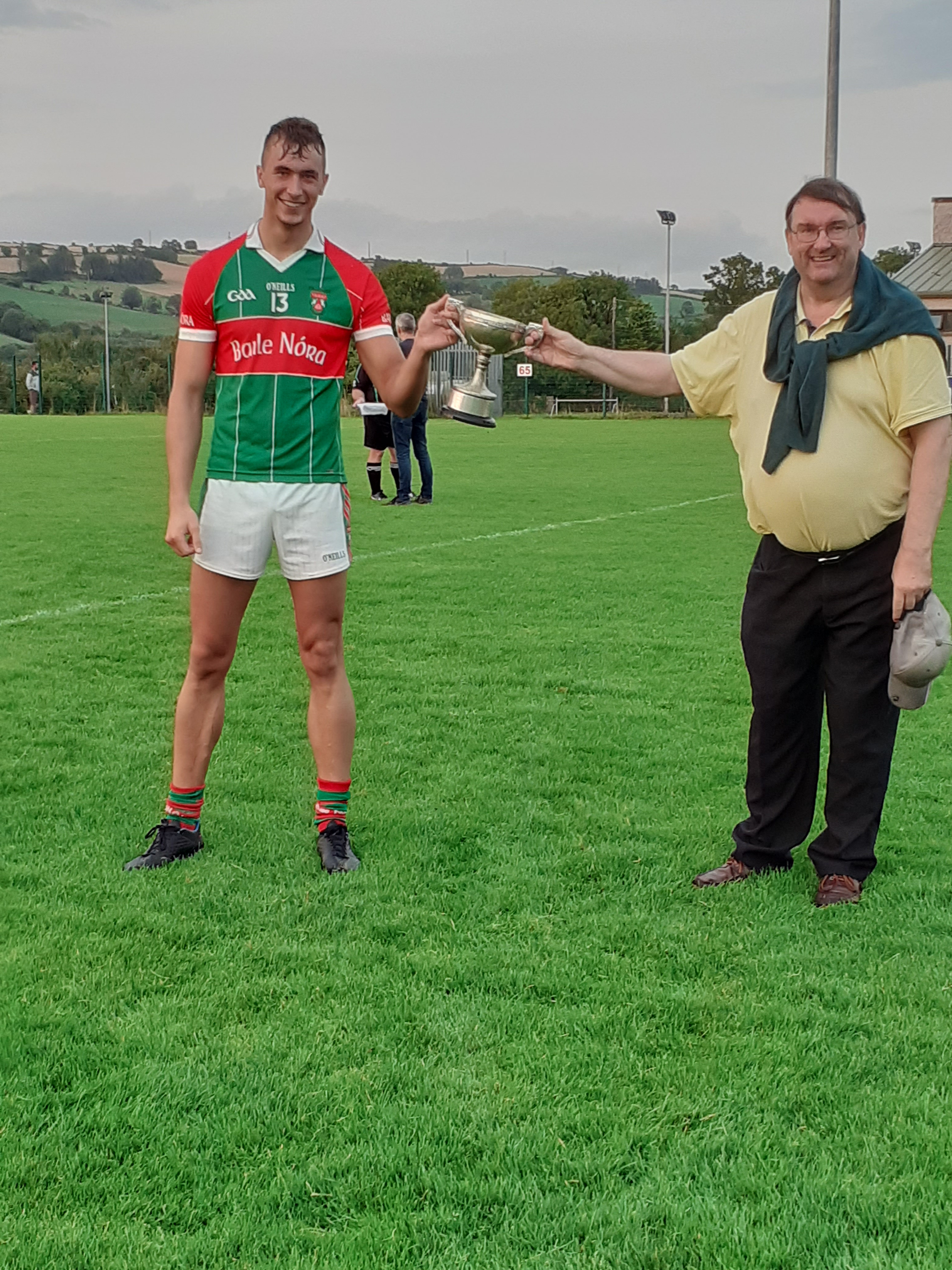