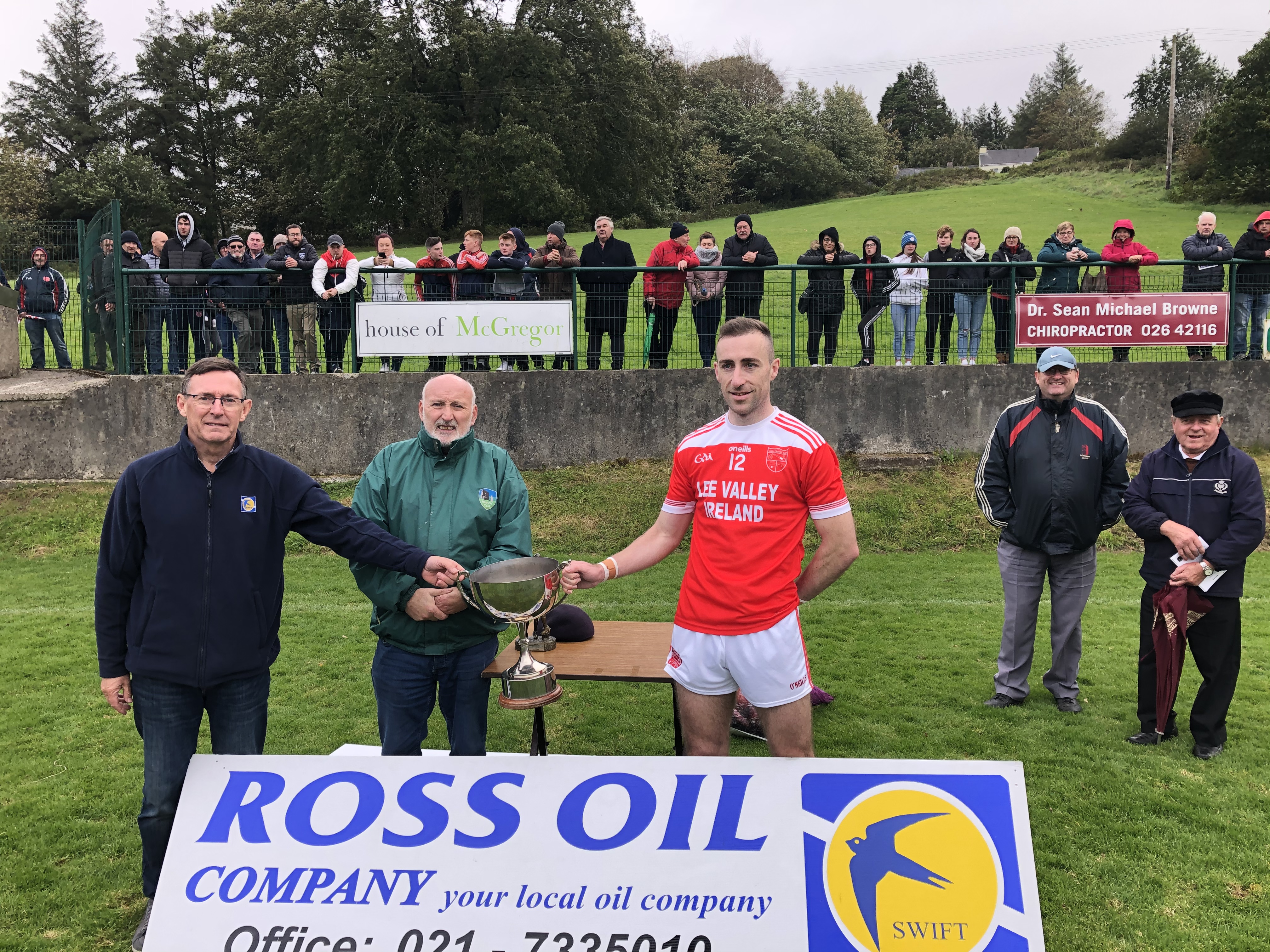 Captain Brian Cronin leads his side to glory.....

..Uibh Laoire are Ross Oil Junior A Football Champions after completing a three-in-row in mid Cork narrowly defeating Kilmurry in a cracking game at Macroom. The Inchigeela side threatened to pull away on a couple of occasions but this young Kilmurry side has plenty of grit for the battle and they refused to give up.

Cathal Vaughan landed the opening ’45 after his side played with the strong wind in the opening half. Kilmurry have suffered a number of injuries to crucial players this season and cruelly they lost their influential full forward Dave McCarthy after a couple of minutes. Uibh Laoire’s Barry O’Leary was presented with the man of match trophy and he landed his side’s second point after good work from Conor O’Leary. Kilmurry’s James O’Mullane was a contender for that gong and he flicked over his sides second point. Kilmurry’s Liam Wall has been immense all season and he landed a super point to get his side back on level terms, 0-3 apiece after 10 minutes.

Uibh Laoire have a star-studded forward line but it was midfielder Sean O’Riordan who put centre back Sean O’Leary inside the cover for a cracking goal. Captain Brian Cronin and Chris Óg Jones added further points and suddenly Uibh Laoire held a five-point lead. But Kilmurry battled back with William Buckley landing a brace from placed efforts. James O’Mullane added another before Vaughan replied with a free. Chris Óg Jones was finding it tough to shake off William Ronan but he flicked over a beauty from play. O’Mullane was keeping Kilmurry in the game and he landed his third to leave his side trailing, 1-8 to 0-7 at the break.

Kilmurry got back another with a good individual effort from Padraig Berhanu from the throw in. Uibh Laoire’s Cathal Vaughan landed a free before wing back Kevin Manning landed the score of the game with a monster effort from out on the wing. But Kilmurry converted frees from William Buckley and Liam Wall before James O’Mullane sent a goal chance wide of the post. The lively Berhanu was taking the game to his opponents and he reduced the gap to the minimum with two excellent points, 1-13 to 0-12 after 50 minutes.

In a frenetic closing spell Uibh Laoire needed a score and Chris Óg landed a cracker just when the need was greatest. Kilmurry’s substitute Sean Warren reduced the gap to the minimum with a superb line ball which was the final action of a great final.