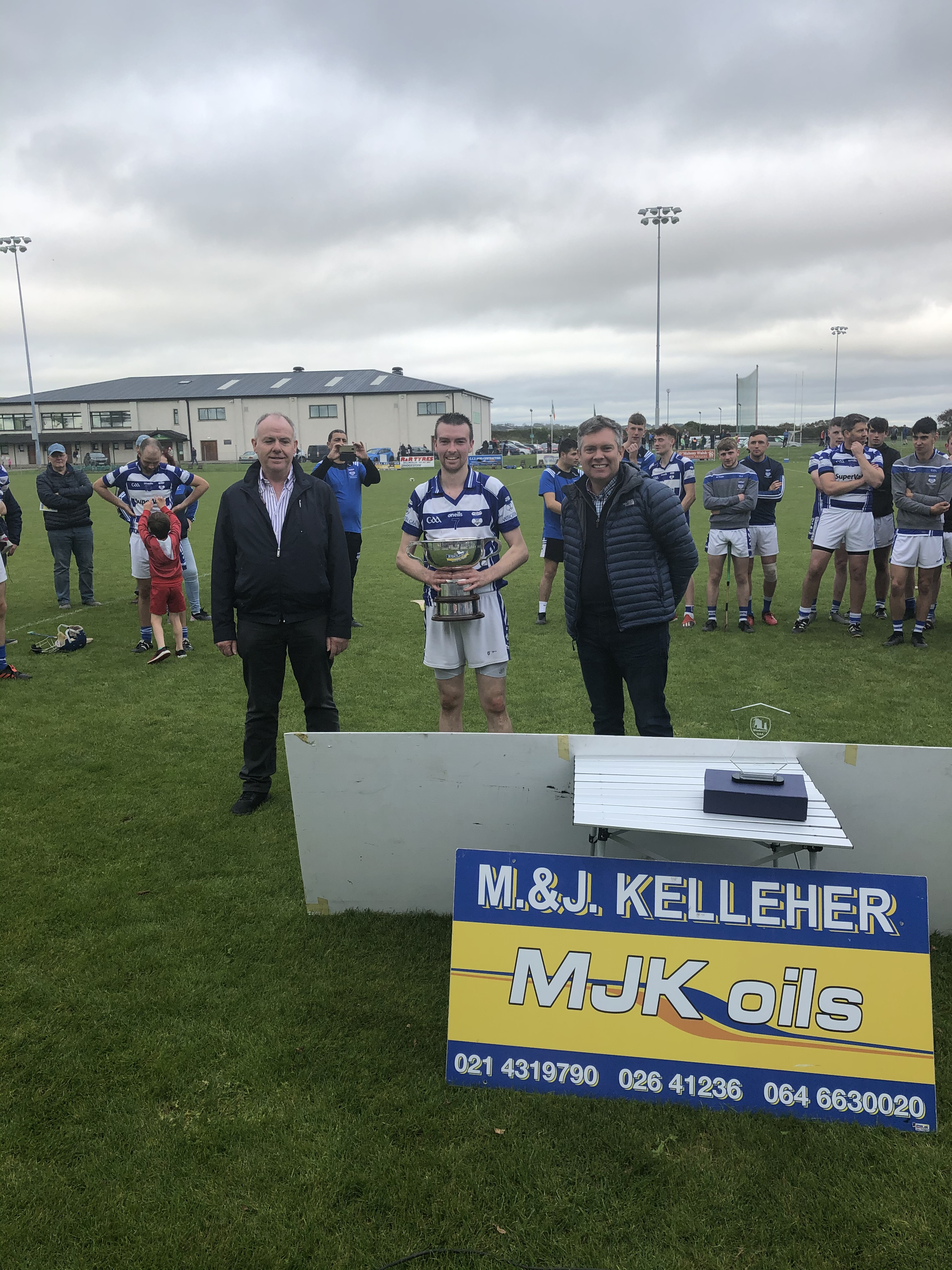 Inniscarra are MJK Oils mid Cork Junior A Champions after edging out Ballinora in a thriller at Cloughduv. A crucial goal midway through the second half from long serving forward Dan O’Connell ultimately proved the difference between the sides. But Ballinora will have regrets about this one after squandering a couple of glorious goal chances in the opening half. But in the end Inniscarra were deserving winners with midfielder Aidan O’Mahony putting in a man of the match shift and scoring 0-11 points in total.

The opening exchanges were scrappy before the aforementioned Aidan O’Mahony landed two frees and a third from Kieran Rice gave the victors an early 0-3 lead. Ballinora looked nervy early on before they found their rhythm and points from Alan O’Shea and Kevin Murphy reduced the gap to the minimun. Inniscarra upped the tempo and points from Dan O’Connell, Kieran Rice and another placed effort from O’Mahony gave them a four-point lead, 0-6 to 0-2 after 15 minutes.

Ballinora’s Darragh Holmes had an outstanding game and he landed a brace of frees to keep his side in touch. Inniscarra replied with a monster free from their goalkeeper Padraig Holland and a placed effort from O’Mahony. Ballinora missed a glorious chance to find the net when Patrick Fitton initially fumbled before clipping over the bar. Alan O’Shea added another excellent score which reduced the gap to two points. Ballinora were piling on the pressure now and Inniscarra goalkeeper Padraig Holland brought off a brilliant save from Kevin Murphy. Moments later Darragh Holmes found Luke O’Donovan with a crisp pass across the goalmouth but he failed to make to contact when a goal looked certain. Inniscarra’s young goalkeeper Padraig Holland came up to take a 20m at the other end but his shot was well saved by Ballinora’s netminder David Howard, 0-10 to 0-8 at halftime.

Patrick Fitton reduced the gap to the minimum with a good point before Inniscarra replied with two massive scores from Aidan O’Mahony. The intensity of this final rose a notch or two as Ballinora stormed back into the game with two points from Darragh Holmes (1f) and an inspirational long range free from their goalkeeper David Howard. Holmes clipped over his sixth of the afternoon which gave Ballinora the lead for the first time in the game, 0-13 to 0-12 after 45 minutes.

Aidan O’Mahony landed the equaliser before Darragh Corkery put Ballinora in front again. Inniscarra’s Kieran Rice looked threatening all afternoon and he slipped inside the cover and hit a super shot which Howard saved but the evergreen Dan O’Connell reacted quickest and blasted to the corner of the net.

Holmes reduced the gap to the minimum before two massive placed efforts from Aidan O’Mahony really lifted the Inniscarra men. James Murphy landed an excellent point from play before O’Mahony landed a massive free from 70m out. Ballinora kept on plugging away and just entering injury time Darragh Holmes managed to scramble home a goal in a real goalmouth scramble to give his side a lifeline. But in the end, it was fitting that Aidan O’Mahony landed the final score of the game with another exceptional free as he was the difference between sides.