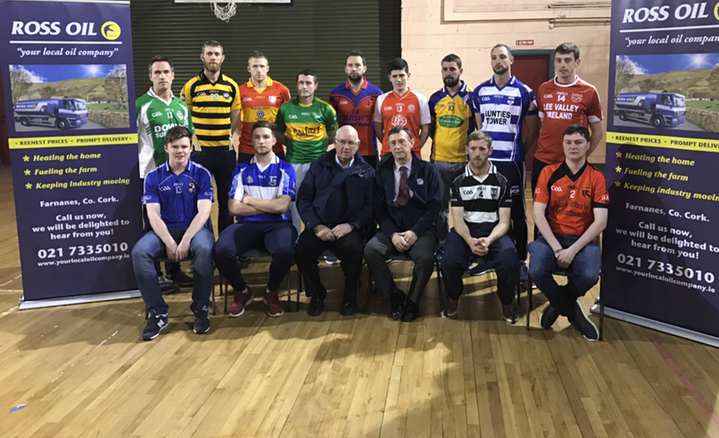 Mid Cork Junior A Football Championship Round One:

The opening game of the 2020 Ross Oil Mid Cork Junior Football championship was played at a damp Macroom with Covid -19 regulations in operation. Canovee turned in a performance that had their mentors happy.

The outcome was nearly guaranteed when Canovee turned over leading by ten points at half time. Aghinagh, fielding a young side and affected by retirements and injuries, had opened the scoring with an early Liam Twohig point, Mark Healy had quickly replied and then in the 8th minute, Canovee wing back Eoghan Lehane fisted an Evan Dodd centre to the net to give his side a major boost. Healy and Twohig exchanged points and Canovee led by 1-2 to 0-2 at the first quarter water break. Within five minutes of the restart, Canovee had added 1-2 to their tally, the goal from a James Moynihan penalty after a foul on Seán O’Connor, and they added further points from Healy, Evan Dodd and Lehane to lead by 2-7 to 0-3 at half time, and were clearly the better side.

The third quarter brought no relief for Aghinagh, Eoghan Lehane firing home his second goal for Canovee in the 42ndminute, then Brian McNabola banged in goal no. 4 for Canovee in the 52nd minute. Aghinagh’s persistent brave efforts were rewarded with a late goal from Richard O’Sulllivan.

Grenagh, back down in junior after 14 years in Intermediate ranks, will be delighted with this opening round win in the Ross Oil Mid Cork Junior A football championship at Rusheen. Éire Óg had a strong side on duty but Grenagh are experienced campaigners and managed to contain the threat posed. Éire Óg contributed to their own defeat by wasteful shooting, particularly in the first half but it was a fine performance from Grenagh.

A goal from Joe Cooper in the tenth minute gave Éire Óg a one point lead and Grenagh did not regain an advantage until Seamus Cronin was up in attack to make it 0-5 to 1-1 just before the water break. Grenagh were leading by 0-7 to 1-2 at the half way stage.

Points were exchanged three times, 0-10 to 1-5 after 45 minutes. Jerome Kelleher’s free reduced the deficit to the minimum, the impressive Ultan Duggan kicked his third point to double the gap and the evergreen DD Dorgan increased it further from a free, five minutes from time. Éire Óg poured forward in waves to be met by a solid wall of determined defenders and a point from John Dineen was to be their only reward.

Donoughmore put the disappointments of last season behind them and had a fine win over Kilmichael at Carrigadrohid. After an even opening quarter, a goal from Martin O’Sullivan put Donoughmore 1-2 to 0-3 in front and they were still to the fore at the break leading by 1-8 to 0-6.

Kilmurry, disappointed with their championship campaign last year showed that they are on a mission of redemption when disposing of the challenge of the Cill na Martra second team at Annahala. They were fully focussed from the start and Tomás Collins had their first goal after four minutes. They led by 1-6 to 0-2 at half time, Wm Buckley 0-4 and James Mullane with 0-2. Further goals from Js Mullane and Marco Healy had them very comfortable all through the second half and Seán Warren 0-4, Dave McCarthy 0-3, Js Mullane 0-2 and Liam Wall and Marco Healy 0-1 each, chipped in with the points. Dean MacCarthaigh scored 1-4 for Cill na Martra and Criostóir Ó Loinsigh notched 0-2.

Clondrohid did not have much luck in this tight encounter at Inchigeela. They conceded a first minute goal, credit to Béal Átha’s Seán Ó Muineacháin for an opportunist swoop on a loose ball, and trailing by three points in the final minute, their Seán Desmond had a ferocious blast diverted on to the post and out into play.

With Darren Dineen in form from frees, Clondrohid had drawn level by the end of the first quarter but Seán Ó Muineacháin was in accurate mood as well for Béal Átha who led by 1-4 to 0-6 at the break.

Two points from Andy Ó Coinceannain helped Béal Átha to a four point lead by the start of the third quarter and Clondrohid did manage to reduce this lead but the experienced players on the Beal Átha line out helped to retain possession and frustrate Clondrohid’s best efforts though it still took the post to deny Clondrohid at the finish.

Ballincollig and Blarney met at Coachford and a very disappointing contest was the outcome with Ballincollig much too strong. Ballincollig were on the offensive from the off with pointed frees from Eoin O'Reilly and Steve Wills and when centre half forward Robbie Noonan added three points from play they were looking secure already. The winners led 0-8 to nil at the interval and led by 0-11 when before Blarney managed to open their account in the 44th minute, James Walsh the scorer. Paul O'Connor added on a point from play a minute later but that was as good as it got for Blarney.

An understrenght Inniscarra team were just not able to cope with the power of reigning champions Iveleary at Kilmurry. Iveleary were on the offensive almost from the throw in and were fully focussed on their task. Cathal Vaughan and Brian Cronin both pointed from frees to get things underway, Conor O'Leary and Brian Cronin added before Ciarán Galvin slotted home the first goal and clearly this was ‘no contest’ with an air of inevitability about the outcome. Subsequently Brian Cronin, Aaron O'Donovan (twice) and Cathal Vaughan had points, Inniscarra’s only reply came from Aaron O Raw and at half time Iveleary led 1-8 to 0-1 on the road to victory

Iveleary added another 0-4 in the opening ten minutes of the 2nd half, Aaron O Donovan, Cathal Vaughan(2) and Chris Óg Jones all on target. Chris Óg Jones added a second goal to make 1-15 to 0-1 before Inniscarra improved their scoreboard position when an Eric Baxter point was followed by a goal from a penalty scored by substitute Sean Lynch who also sent a free over the crossbar in the dying seconds.