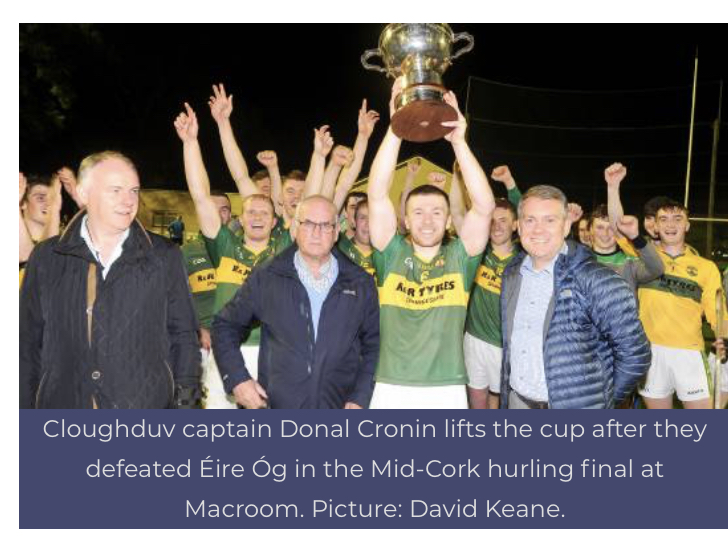 It was a competitive contest in the main, but in the end it was Cloughduv that just about had that greater cutting edge.

On a general sense though, it perhaps shows the strength of hurling at the moment in these two clubs that their respective second string outfits made it to this final played in Macroom.

Éire Óg got the opening score of the contest through Cork Senior Football panelist Ronan O’Toole. Cloughduv though responded in kind through a free by Darragh Walsh.

Scores were exchanged as the sides remained level early on, through Eoin Lyons for the men from Ovens, with Aodh Twomey and Walsh replying for Cloughduv.

Then, Cloughduv found the back of the net with 16 minutes on the clock. Some good work by Jack Kelleher set up Con Dunne, who buried the ball home clinically from close range.

That was the commencement of a fruitful ten minute spell, which saw Cloughduv add to their tally through further points by Walsh and a fine long ranged score by Luke Elliott.

Although Éire Óg got a point just shy of the half hour mark from Sean Desmond, is was Cloughduv who led at the half time break courtesy of a 1-6 to 0-4 score line.

It was Éire Óg that commenced intently at the start of the second half. All Ireland U20 winner with Cork Colm O’Callaghan made an impact right away when he was sprung from the bench.

By the mid way stage of the second half , the Ovens side cut the gap between the pair down to just a single point, courtesy of scores from that man Lyons, who was deadly from placed efforts throughout.

However Cloughduv found a late second wind and ended the game well. Kelleher capped off a fine individual man of the match display with a further contribution to the score board, while Aidan Ahern also score a close ranged free.

Both of these two teams will now face into the Cork County Junior Hurling championship battlefield over the next forthcoming number of weeks.

Crucially on this particular evening, it was Cloughduv that basked in the glow of championship glory.